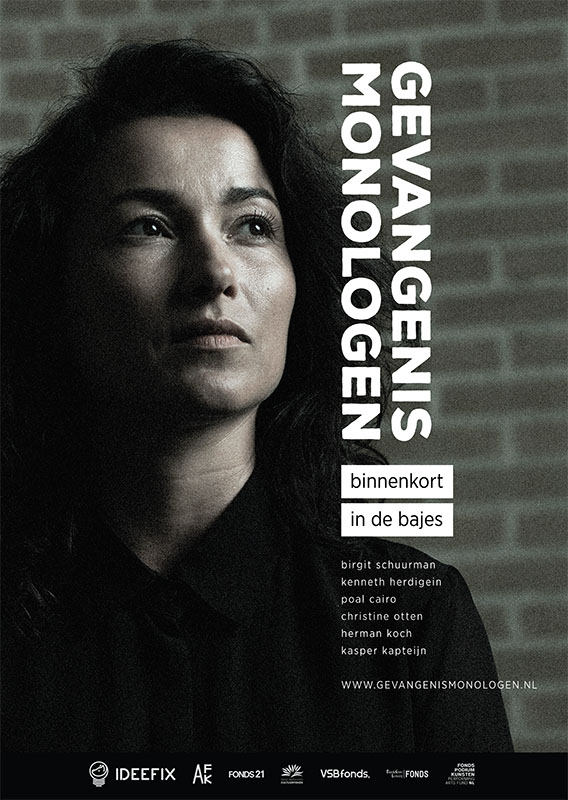 The iconic prisons of Amsterdam, Haarlem, Utrecht and Arnhem will provide a unique insight into prison life. The life stories of two ex-prisoners are the common thread through the 25 performances of the theatre production Prison Monologues 1.

A writing course for inmates brought writers Christine Otten, Herman Koch and Manon Uphoff into contact with Wesley and Arsen. After all the negativity, they wanted to try to do something positive with their stories, and the idea arose to give the public an insight into the world of detention and correction. “A prison is an enlargement of people, a small version of society.” says Christine Otten, creator and artistic director of the project. The Prison Monologues wants to convey this image and make the public think about what we do as a society when we decide to imprison someone. That this world is not black and white either, but is more complex and nuanced than most people think.

Producer Daniel Krikke involved director Kasper Kapteijn in the play; Birgit Schuurman, Kenneth Herdigein, Poal Cairo and Thomas Boer form the cast and Lorijn von Piekartz provides the musical accompaniment. A team that, in addition to the exciting subject and the infamous locations, appeals to a wide audience. “It is precisely the intention that not only the traditional theater audience will visit the performance, but that our halls will soon be filled with young and old, and people with different backgrounds and interests. We can already see this reflected in the broad interest in our project. ” says Daniel Krikke.